Over 300 million olive trees grow in Spain, making it the world's leading producer of olive oil and table olives. The fruit of the olive tree is a drupe but, unlike other stone fruits, the sugar content is very low and the flavor very bitter. This means that olives cannot be eaten raw. In order to make them edible and to preserve them, they are processed in different ways depending on the variety, their ripeness and the traditions the different regions. In some cases, the traditional methods for preparing table olives are as old as the human need for preserving food and are based on a resource that has always been plentiful in the Mediterranean, salt. 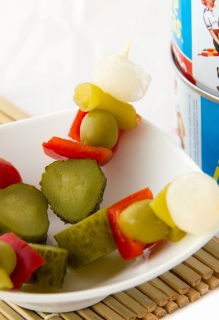 Pickles are products, such as scallions and gherkins, which have been acidified, generally in vinegar. Alongside them are capers, the closed flower buds of the Capparis Spinosa, considered in ancient times to have medicinal properties.

Banderillas are a combination of pickled or brined vegetables on a skewer.  A typical banderilla  might include little onions, cucumber pickles (whole or sliced), various sorts of peppers (both piquant and mild), and, almost always, a pitted olive.  Many banderillas also include pickled or brined fish. Anchovies, both cured (anchoas) and pickled (boquerones) are probably the most common.

A Gilda is a combination of gherkin, olive, pepper (sometimes also onion) and canned fish, usually an anchovy, served on a stick.