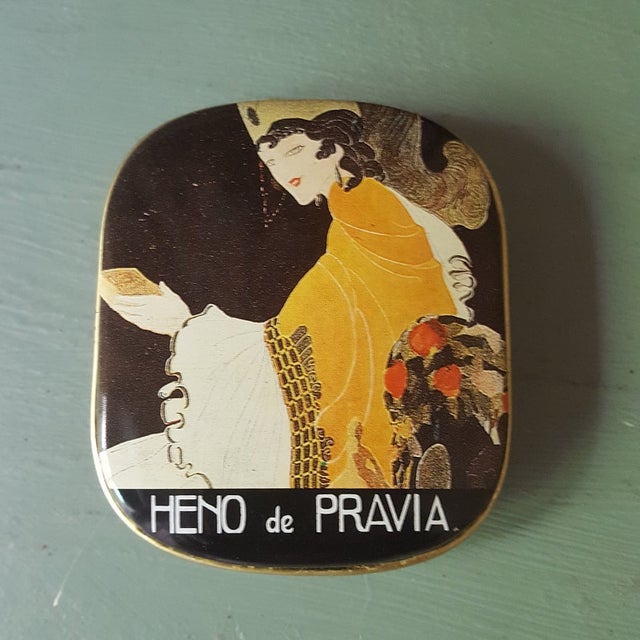 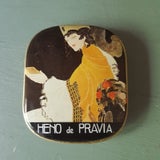 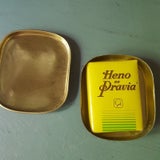 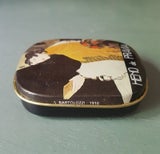 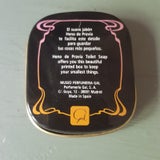 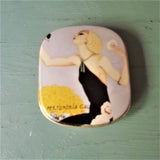 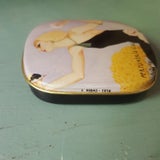 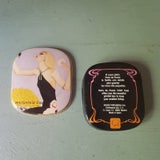 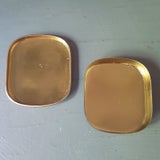 This is a vintage mini soap tin from Heno de Pravia soap collection by the Spanish Perfumería Gal. Charming little tin rounded rectangle boxes with litho print decoration of exotic Art Deco ladies. The pictures on these small tin boxes were drawn by Spanish famous illustrators Federico Ribas, Rafael de Penagos and Salvador Bartolozzi in the early years of the 20th century. Marked on the back for Museo Perfumería Gal, Madrid, Spain.

Both the tins and soaps wrapping are in great condition. There is very minimal signs of wear. There is a sweet message on the back of the tin, "Heno de Pravia Toilet Soap offers you this beautiful printed box to keep your smallest things".

Only 1 of them contain Heno de Pravia small toilet soap each 15g wrapped in designer-branded silk paper. The fragrance of each of this soap smells absolutely divine and has not been tested on animals.

Add to Cart
​​"Pompadour" by F. Ribas 1916 with soap. A beautiful Art deco print, showing a woman holding a hand fan and 'Heno de Pravia' printed on it.

"Shingetsu" by S. Bartolozzi 1916 with soap. A beautiful Art deco print, showing a woman holding a box and 'Heno de Pravia' printed on it.

"La señorita Pilar" by R. Penagos 1916 with soap. A beautiful Art deco print, showing a woman washing her hands and 'Heno de Pravia' printed on it.

"Lady original" by F. Ribas 1916 without soap. A beautiful Art deco print, showing a woman holding a powder puff inscribed Gal. The original drawing is in the museo Gal in Madrid.

"Lady in the mirror" by F. Ribas 1916 without soap. A beautiful Art deco print, showing a woman holding a mirror and 'Perfumería Gal' printed on it.
In 1916, Perfumerías Gal promoted a poster contest from which Federico Ribas would be chosen  as the company's first artistic director. His function was to beautify the product through the design of packaging and labels, and the realization of posters and announcements.

With the inauguration of the 20th century, a glorious stage of the Spanish poster is begun. The commercial poster managed to join art and industry constituting a link between the artist and the merchant or manufacturer, although more than a patronage relation it was a link based on the collaboration among both for mutual interest. The purpose of the contest summoned by the pioneering Perfumería Gal was the captation of talent. This event supposed a memorable event from the artistic, advertising and commercial point of view.

​In 1916, Perfumerías Gal promoted a poster contest from which Federico Ribas would be chosen as the company's first artistic director. His function was to beautify the product through the design of packaging and labels, and the realization of posters and announcements. In this contest, three posters were awarded with 1,000 pesetas each of the poster artists who marked the beginning of a renewal stage of Spanish illustration: Federico Ribas, Rafael de Penagos and Salvador Bartolozzi. The three awarded posters are a sample of the temperament and particular style of each artist, but above all, they demonstrate that they all had an exceptional mastery of technique. A characteristic common to the three winning posters is the prominence given to women who will become the object of preferential attention in the advertising of the Perfumería Gal, in addition to the sophistication and refinement inherent in their drawings.

​Bartolozzi's suggestive proposal "Shingetsu" presents a very personal style. The author presents as central theme of his work an oriental woman, fruit of the then prevailing influence of Japanese lacquers.

Rafael de Penagos submitted a proposal to the competition under the slogan "Miss Pilar", a balanced composition in which simplicity prevails. This shot features a kneeling woman who washes in a basin while giving an attentive glance to the potential viewer. This female figure is located in a bourgeois setting made up of a mirror in which she appears reflected, a vase with flowers and the fluffy cushion on which she kneels.
The Federico Ribas poster, «Pompadour», is the most advertising proposal of the three winners. Unlike the other winning posters, the structure of this poster It is conceived to highlight the product above the main characters, in this sense is the most commercial of all since it clearly underlies an intention advertising.

​In the Penagos and Bartolozzi proposals, Heno de Pravia soap constitutes a secondary element of reduced visibility, while Ribas grants it a absolute pre-eminence by surrounding it with a border and placing it in the central axis of the composition. The vertical axis of this poster is made up of Madame of Pompadour33 and the Heno de Pravia soap bar, both in yellow that stand out from the rest elements. At the top of the composition, four sweethearts are carriers of some Heno de Pravia's soap bars; they jealously roast because they seem to be stealing the secret of her beauty from the marquise Pompadour. It is worth highlighting the set of looks that the sweeties to Madame Pompadour: they watch her expectant while she, oblivious to everything, maintains her eyes closed with a gesture that, at the same time, expresses delight and nonchalance.

The compositional structure of this plan determines that the visual route is centered on first place in the female figure to flow finally in the decorative border that surrounds the product announced. To highlight and enhance the memory of the brand adds a strip as a colophon in which the name of the soap brand appears, as required in the bases.